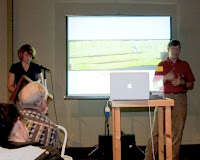 The talk given by Nadine Kopp at the Marine Museum in Kingston was well attended and drew many questions from an attentive and well-informed audience. Nadine presented her findings from last year's survey of the wreck that lies in Navy Bay. Briefly, the wreck is quite likely a warship from the early 19th C. A short list of candidate vessels has been drawn up, none of which, given the limited evidence currently available, can be firmly identified. The picture shows POW President Mike Hill thanking Nadine on behalf of the three sponsors of the talk; POW, the Marine Museum and the Dolphin Scuba Club.
at 2:33 PM No comments:

Everyone is reminded that vacancies are available on a Nautical Archaeology Level One course to be held in Kingston over the weekend of May 2/3. Instruction will be given by members of Parks Canada's Underwater Archaeology Service and the cost of the package will not exceed $200. This certification gives a great insight into ship construction, archaeological principles, survey techniques and methods as well as legal frameworks governing our activities underwater. It is highly recommended, even if you do not intend to undertake survey work. If you do, it is an invaluable foundation to that work. An application form can be downloaded by clicking here. It should be completed and returned by April 20th, if you wish to take the course.
at 11:32 AM No comments:

Don't miss the talk to be given at the Marine Museum of the Great Lakes in Kingston on Friday, March 27th at 7 pm. Nadine Kopp will describe the work she directed last year on an underwater survey of a mystery ship in Kingston's Navy Bay. Nadine's talk is based on one she presented to the Society for Historical Archaeology in Toronto earlier this year. There's a poster available for download by clicking here.
at 11:15 AM No comments: 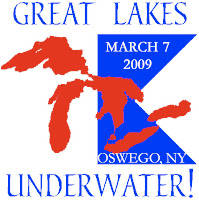 The Great Lakes Underwater Event co-hosted on Saturday, March 7th in Oswego by the New York Sea Grant and the Oswego Maritime Foundation proved, once again, to be an outstanding venue for presentations and discussions on underwater topics, and especially those affecting the Great Lakes. Keynote speaker Jim Kennard delivered two tour-de-force contributions. In the first, he caught the audience up to developments in the process of bringing last year's discovery of HMS Ontario into the public eye. Jim expects that an agreement concluded with a media production company will result before long in a film that allows everyone to enjoy 'access' to the historic shipwreck while providing an accurate context and background to its original role and purpose. His second talk, in the afternoon, focused on three shipwrecks discovered in the deeper waters of Lake Ontario, including the only surviving dagger-board schooner believed to exist.

Other speakers talked about such varied subjects as 'Mapping the Titanic', which outlined the effort to catalogue and geo-locate the artifacts recovered from that incredible site and the story of the U.S. Navy's first warship to sail the Great Lakes, the USS Oneida - an American participant in the War of 1812.

For those who wonder whether this event is worth the 200 Km drive from Kingston, which, incidentally, runs through some of the most beautiful countryside in Upper New York State, I can honestly say - Yes...

Congratulations - and a sincere thank you - to the organisers and their sponsors.
at 9:27 AM 1 comment:

Members - and other interested parties - are now able to read the Spring Newsletter. Just click here to view and download your copy. There's news of what lies ahead for POW - and of events that might interest you. The next Newsletter will be produced in May. Please consider contributing your news and pictures - or ideas for things that POW might do to attract new members and inform and entertain existing ones...
at 10:25 AM No comments: